The Women’s Health “I Support Women in Sport” awards is not only an excuse to frock up out of my usual gym gear, it’s a night to celebrate the fantastic athletes we have in this country – from the up and comers, the local heroines giving back to their communities, to the great champions, the leaders on the field, and off the field with media personalities promoting our stories and the women doing so much behind the scenes to promote gender equity and a positive environment for women to reach their potential in sport.

Rebel was a major sponsor of the event, and I was honoured to present the award for ‘Person of Sporting Words’ on behalf of the Rebel team. Amanda Shalala from the ABC was a worthy winner, a great advocate for the women in sport cause and the first journalist to interview me after I’d won a silver medal at the Olympics in 2012!

Our very own Rebel ambassador Laura Geitz was named the ‘Leadership Legend’ this year – and rightly so, after the fantastic performances of the Diamonds this year, who were named ‘Team of the year’!

It is a night that inspires even the greatest of champions with Sally Pearson saying that after a tough year of injury, she felt motivated and inspired by the evening to push hard for Rio. Anna Meares was crowned ‘Sportswoman of the year’ after winning her 11th world title this year (this woman is unstoppable!!!!). I was honoured to be nominated for Sportswoman of the year after having won the ‘Outstanding woman in sport’ award last year. Just making the top 5 cut alongside some pretty illustrious women has made me proud and humbled.

Some highlights for me were catching up with my Redbull sisters Sally Fitzgibbons, Jordan Mercer, Ellyse Perry and Anna Flanagan. It was special seeing my friends Jordy Mercer, Caroline Buchanan, and Ellyse Perry all recognized for their great achievements this year and Lydia Lassila for her innovation and contribution to her sport in leading female aerial skiers to close the gap with the men – stay tuned for her documentary ‘The Will to Fly’ – it looks incredible! One of our greatest swimmers, Susie O’Neill, was the first inductee into the Hall of Fame (I used to have a Susie O’Neill Barbie doll … great to see her again in real life!) 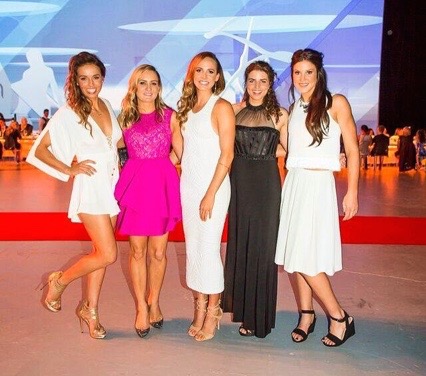 The “I Support Women in Sport” campaign was launched in 2010 and in five years, Felicity Harley and the Women’s health team have brought many issues faced by female athletes to the fore such as unequal pay, and created this amazing movement that encourages the recognition and participation of women in sport. It’s clear that there is momentum and positive change happening in the way we view and treat female athletes, the exposure and coverage they are receiving and financial support. What I love most about this campaign is that it has created a really special bond between female athletes – we all follow each others journeys online and this event brings us all together to share our stories, be inspired or just joke about how hard it is to walk in heels! The main thing is that it is a campaign that has people talking, and interested in female sport, recognizing the great achievement of the women in this country.

A-Team of the Year - Diamonds